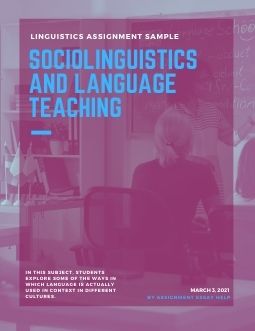 In this subject, students explore some of the ways in which language is actually used in context in different cultures. The emphasis is on understanding and describing how people actually make use of the language and how this impacts on communication and miscommunication, particularly between native speakers and learners of a language. Some of the theoretical and practical issues in the investigation of authentic language use are tackled and the practical implications for teachers, language curriculum developers and others involved in interactions with people from other cultures are explored.

When I first read the question for this assignment, the first public place that came to my mind was a public park. As an international student living in Melbourne, public parks in Melbourne have become one of my favourite places to spend time. My time in the public parks here have served various purposes –experiencing trends in current Australian society, a source of knowledge of the history of Australia, a place for socialisation as well as private me time, connecting with nature, getting fit etc. The assignment question for redesigning linguistic landscapes brought fresh perspectives of the role public parks anywhere in the world play in the social lives of the people in the neighbourhood. I began to look at my daily time at the public park exercising or meeting friends with a different perspective and started on a train of thought on the linguistic landscape of public parks in general and how they can be redesigned to achieve specific social and/ or linguistic objectives.

Public parks in urban settings have become the much-needed lungs of the increasingly crowded and polluted urban landscape all over the world. Melbourne has made a special commitment to making Melbourne an environment-friendly city and has about 480 hectors public parks and garden spaces (City of Melborne, 2017). With environmental concerns gaining increasing importance with people and policymakers of Melbourne, the first specific objective of the redesigning of linguistic landscapes of public parks in Melbourne suggested in this essay will be to aid the environmental concerns of the city and people of Melbourne.

Public parks in Melbourne are very well maintained and attract people from all sections of Melbourne society-families, sportspeople, singles, visitors on a temporary visit to Melbourne, employees of neighbouring offices on lunch breaks, homeless people, groups/communities looking for open spaces for group activities all kinds of people visit the public parks of Melbourne for various reasons. Public parks in Melbourne are very representative of the diversity of the population of Melbourne with regard to languages, and one can hear many different languages from all parts of the globe spoken here. The pie graph below depicts the ethnicity of a neighbourhood in Sydney, Australia and can be said to be representative of the multiculturalism of all Australia, especially the cities. I have heard seen people from different parts of the world speaking many different languages during my time spent in the public parks of Melbourne/ Australia. Redesigning the linguistic landscape of public parks in Australia can have as the second objective celebrating/ reinforcing the multicultural nature of Australian society of today.

Public parks can be vital to the social life of any city and can also change the tempo and quality of life of a city. The Central Park in New York is supposed to have been conceived off and built as a result of the first wave of immigration in New York in the 19th century as an experiment in democracy (Mishra, 2016). While the same article states that the lofty democratic ideals behind the design and execution of the Central Park in New York have still not been met, redesigning the linguistic landscape of public parks in Australia can have one of its third objective living up to the democratic ideals and traditions of the Australian state.