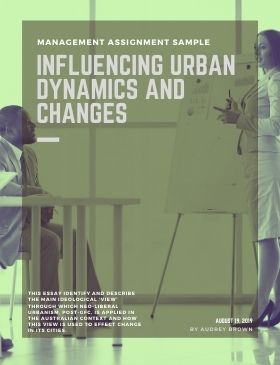 You can download the sample assignment essay on Influencing Urban Dynamics and Changes with the following question for free at the end of this page. For further assistance with  Management Assignment help, please check our offerings in Management assignment solutions. Our subject-matter experts provide online assignment help to Management students from across the world and deliver plagiarism free solution with a free Turnitin report with every solution.

Topic Identify and describe the main ideological 'view' through which neo-liberal urbanism, post-GFC, is applied in the Australian context and how this view is used to effect change in its cities. (To help you frame your argument you may provide an historical analysis of the rise of a neo-liberal ideology and provide examples from around the world where it has been applied to affect (urban related) change.)

Describe, through comparative case study examples, some of neo-liberal urbanism's common strategies (or mechanisms) used to formulate and express influence over the 'citizenry' and built environment in an Australian city of your selection. Then based on your readings and research formulate and present a considered opinion that argues for a continuation or discontinuation of neo-liberal urbanism in the Australian urban context. In particular and in the consideration of your opinion, reflect upon and discuss neo-liberal urbanism's effects on the present and future citizenry of your selected city. Be sure to illustrate this latter requirement by pursuing (i.e. describing) a 'preferred (urban) future' in your argument.

Questions to consider when developing this essay (note these questions are to help you develop your work and not intended to be an outline for your essay):

1) What is neo-liberalism urbanism, where did it come from and how does it work?

2) How does neo-liberalism exert influence over the citizenry and urban environment?

3) What impact does neo-liberal urbanism have in the Australian urban context?

4) From your research and reading how might you argue for a continuation or discontinuation of neo-liberalism in the Australian urban context?

5) What is your preferred Australian urban future and how might that be achieved?

Materials & Resources: There are references and resources listed in the Unit Guide that can help with this assignment. These, however, must be supplemented by other sources that you identify.

Several documents have been listed in the Unit Prospectus and some new are listed below to help your essay development. As they draw heavily on other sources, these documents also provide a valuable source of references to more detailed work by others.

In particular, have a look at the following:

Referencing Reference the sources you access, demonstrating the reading you have undertaken in preparing for this essay.

Attribution of material that has been accessed from other sources (particularly where you copy the words of others) is essential. The assessment tools available in CloudDeakin identify all text that has previously been published, so it is vital that you follow the protocols for acknowledging all sources appropriately.

This essay is expected to be extensively referenced. Proper referencing is essential, utilising one of the established conventions for referencing sources. In assessing possible sources, differentiate between 'commentary' and robust research or theory – opinions are an important part of debate about issues, but ensure that this is clearly represented as opinion and not given comparable weight to well-founded research. Aim for original materials, not media or second-hand reports of research or opinions, as these can often be selective or lack the context or qualifications of the persons or work being reported.

• Evidence of informed research on the topic, including identification of relevant materials beyond those provided or recommended.

• The clarity with which key issues are identified and articulated.

• The depth and rigour of arguments being advanced, and use of evidence to support these.

• The exercise of critical evaluation in the interpretation of material and issues.

• Synthesis of multiple resources or perspectives to value-add to review of the topic.

• Quality and clarity of construction, grammar and presentation.

• Referencing of resources supporting statements or components of the essay.

Neoliberal ideas and thoughts are based on the premise that open, unregulated markets offering the scope of free and open competition with minimum interference from external actors, offers the best way of achieving overall socio-economic development and well-being of the country and the population at large. Neoliberalism as a coherent ideology or thought process gained prominence in the Western world, particularly in the UK, US, and Australia, from the late 1970s and early 1980s onwards. The stimulating factors for the growth and popularity of neoliberal thinking among policymaking circles was due to the impact of the severe industrial and economic downturns in these countries in the mid 1970s which forced the Western political and bureaucratic leaders to focus on a more comprehensive development of the knowledge economy, the service sector including such non-manufacturing business as the financial services and banking sector. The decline of traditional manufacturing industry and it’s losing out to competition from the Third World led to a rethinking of the economic model. Moreover, it was felt that easing of government restrictions on business would help boost the economy. The corresponding budget deficit crises due to the welfare and benefits burden was also a contributing factor for encouraging neoliberal tendencies among the Australian political circles of both the Left and the Right. Even the traditional Australian centre-left embraced aspects of neoliberalism from the early 1990s onwards (McKann & Ward, 2011).

As a result of the breakdown in the economic systems and urban governance frameworks in the 1980s, the federal government and the state governments all through the more seasoned industrialized world started, if reluctantly to start with, to destroy the institutional establishments of the post-war settlement such as consensus and compromise in urban governance, and instead started to prepare a scope of strategies expected to develop the range of business control, rivalry, and commodification. In this setting, neoliberal regulations were conveyed to legitimize, the deregulation of state control over business strikes on sorted out work, the diminishment of corporate duties, the privatization of open administrations and resources, the destroying of social aid programs, the improvement of universal capital versatility, and the heightening of interlocal rivalry. Amid the 1980s, neoliberalism was secured as the predominant political and ideological type of industrialist globalization (Kunkel & Mayer, 2011).

Despite predictions and assumptions to the contrary, neoliberalism as a coherent body of thought and action on urban development has proved quite resilient and has outlived its initial post-Keynesian 1980s context and background. As neoliberalism is supposed to provide a solid framework for robust urban growth accompanied by economic development, it has continued to be relevant in the policymaking circles as a driver of economic growth and as an ethos for planning and organizing modern economy and society. Moreover, neoliberalism has outgrown from its initial grounding in the Western world and has expanded in popularity to the Third world countries such as Brazil, India, Turkey, and South Africa. In both liberal/democratic countries as well as countries ruled by authoritarian regimes, neoliberalism has proven to be relevant in shaping urban policy and as a conjoined factor along with such economic aspects as free trade, market regulation, labour rights (or rather the whittling down of the same), environmental clearance for industry, etc. Even traditionally and stubbornly Keynesian and/or welfarist countries such as Sweden and Germany have started walking on the path of neo-liberalism in the aftermath of the post-2008 recession and financial crisis. Such narratives centre on arguments to cut public spending by reducing subsidies to impoverished urban councils, cutting welfare benefits to poor urban families, and putting welfare infrastructure such as schools and hospitals on hold so as to give priority to building infrastructure with direct business benefits, such as road widening and building civil constructions such as bridges and flyovers. In Sweden in 2008-09 for the first time in 3 decades, more money from the budget was spent on urban construction than on urban social welfare and education. This sort of urban construction includes not just public infrastructure but such commercially viable projects as tourist centers, travel centers, and more well-designed railway stations (Peck, 2010).

The post-recession narrative of revived Keynesian arrangements and more market regulation despite neoliberal administration, regardless of its conspicuous vulnerabilities, seems just to have solidified in the wake of the 2007–8 monetary and financial crisis. Crucial to the fruitful adjustment to, and multiplication of, neoliberalism inside a mixed bag of unevenly created spaces have been the all around reconfigured urban settings where neoliberal thoughts and approach practices have been tried different things with, altered, challenged, and actualized in generally particular and uneven ways. The courses of action of neo liberalization have in this way been neither uniform nor unchallenged; rather, they happened and keep on happening by means of the proliferation – through fluctuated nearby foundations and political activities, every molded by its own verifiable structures and equalization of force – of half and half manifestations of really existing neoliberalisms. Oppositional and testing social developments have all over affected on this multifaceted methodology of creating mainly particular manifestations of neoliberal urbanism, regularly swaying questionable in the middle of resistance.

In times of rapid and unsustainable economic growth, social transformations, as well as changes in the urban structure and development, are more likely to occur at a rapid pace due to the fact that such unbalanced growth will fire up the inherent contradictions in the society, economy, and polity. This makes two civil arguments in the investigation of neoliberalism more notable than any time in recent memory: the open deliberation on the great adaptability of neoliberal urban approaches that get to be inserted in and adjust to such an assortment of distinctive settings – to such an extent that the forms or quintessence of neoliberal urbanism are getting to be progressively ambiguous to numerous external observers – and the related verbal confrontation about whether and how urban social developments test and/or get to be incorporated into adaptable neoliberal legislative issues and strategy. The concepts and proponents of neoliberal urbanism have been criticized because of its inaccuracy and lack of a clear definition of objectives lacking empirical precision. Recently, the usefulness of neoliberalism as a self-sufficient, self-contained logical construct has itself been questioned (Harvey, 2010).

Moreover, a general trend towards using neoliberalism as a catch-all ideology or phrase to anyone supporting rapid and unhindered development itself leads to neoliberalism being reduced to an ambiguous concept. Keeping in mind the end goal to evade this dangerous propensity, in the early built up a scientific instrument intended to recognize neoliberal components of new strategies. All the more as of late, researchers have swung consideration regarding the continuous co-event of neoliberal with other social arrangements, deciphering this not as characteristic of neoliberal dominion being tested, yet rather as an indication of the adaptability of the neoliberal venture. In what has been proposed as ‘variegated neoliberalism’ the systemically uneven character of neoliberal dominion is best seen by dissecting the routes in which a political venture is implanted in diverse connections, which political and force structures to encourage the spread of business principle to more enclosures of social life, and which components of past administrations and which concessions to neighborhood society and/or dissent developments have been molding the neoliberal venture in heterogeneous and variegated ways and channels (McKann & Ward, 2011).