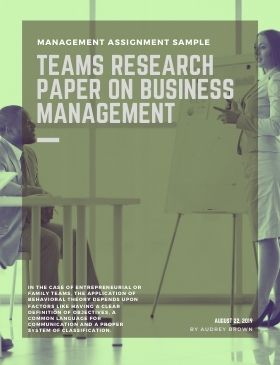 You can download the sample Business management essay on The Undersea Fixed Link Project with the following question for free at the end of this page. For further assistance with  Management Assignment help, please check our offerings in Management assignment solutions. Our subject-matter experts provide online assignment help to Management students from across the world and deliver plagiarism free solution with a free Turnitin report with every solution.

This is a well-researched report analysing four factors affecting the establishment, cohesion and performance of teams in a business context. Please follow the rubric first and third column (product and presentation) section for a better result.

As this is a group work. I only want to write about two of the factors. Number 1(team composition) and number 3(team emotional/social intelligence).

The four factors to be considered are:

For those two factors I require 6 references in APA 6th edition style for in-text and end-text, all in  peer review journal articles only.

Thus, it is very important to get the right team. By choosing the teammates who are considered the most productive isn't always the right option. It is also seen that sometimes teammates with least compatible abilities perform better. Thus, it is observed that a team generally consists of new members. Thus, when comparing a team made of individuals who are best in their respective fields and a team which doesn't consist of such champions, it can be seen that the team having individuals with lesser productive members could outperform the other precisely because this team has a greater incentive to put in the effort (Rolan Bel, 2014).

The above team formation focuses on the horizontal team formation. When considering a vertical team formation, a superior chooses a subordinate and that's how the team is formed. Many promote heterogeneity in this type of team formation while others feel homogeneity is the ideal way. Both have their pros and cons. It is also possible to prevent the breakdown in communication of such teams. One of them is reverse the authority of the superior to grant the replacement. This gives the subordinate the freedom he needs to reveal the information available to him and overall leads to improving the quality of decision making. Another way can be by introducing a degree of ignorance by the superior. This would increase the participation of the subordinate in making decisions. This form is helpful when it is necessary for a team to rely on varied information in order to reach the right decisions (Ruckes, 2006)

In the case of entrepreneurial or family teams, the application of behavioral theory depends upon factors like having a clear definition of objectives, a common language for communication and a proper system of classification. These teams are generally a group of individuals attempting to work together in order to achieve a set of imperfectly overlapping and negotiated organizational goals (Leon Schjoedt, 2012)

Thus, it can be seen that while forming a team it is of high importance to understand the qualities of the teammate and to work in order to grow together. Individual competence would give one the edge but in order to be successful as a team, there should be proper coordinating and alignment of goals so as to achieve the required objectives. This is easier said than done. For doing this, one has to make sure that a level of trust exists between him and his teammates. This would develop over a period of time if the teammates are new to each other or are already present in case the teammates know each other. Either way, this bonding between the teammates is important for the growth of the team. It can be seen in organizations, the team formation takes place on basis of forming a sense of trust between the team members.

These four factors are better described as follows:

1.      Appraisal and Expression of emotions: It is the ability to express and determine for an individual his own emotions as well as the emotions of others.

2.      Use of Emotions: This is the ability of the individual to use the emotion in order to assist the cognitive processes. This is positively using these emotions and turning the negative ones into positive.

3.      Emotional Management: An individual sometimes not only understands the emotions of others but also tries to manage it. In this case, some people are more competent at managing these emotions for themselves as well as for others. This helps managers understand where the emotions should be targeted at and where they are being targeted now. This helps in restricting the strategies accordingly and avoid unnecessary hindrance.

Emotional intelligence is a concept that links the emotions of individuals and the cognition to improve human interactions. In the recent times, it has been linked to an improvement in the workplace behavior and also the team behavior and performance. This is because the team performance is significantly improved and influenced if the team members are able to recognize the emotions of their teammates.

In a similar way, Leader Emotional Intelligence can influence the emotions of its subordinates and their level of motivation. The leaders having a high emotional intelligence use the positive emotion in order to mobilize organizational energy and to activate the employee emotion. Also, individual-level characteristics that the members of a team bring together combine to form the effective composition of the group through the explicit and implicit process. Explicit processes include the various kinds of socially induced affects whereas implicit process would include automatic affect transfer process (Liu, 2011).

Thus, emotional intelligence helps in increasing the efficiency of the team's performance. The positive emotions displayed by the employees help in the growth of the team and a better environment to work at. This helps in achieving the overall growth of the team by increasing its effectiveness. Proper information distribution is feasible in such an environment. But it is not always necessary that positive emotions are present among team members. These emotions are sometimes negative too and affect the decision-making process of the team. Thus, it is of utmost importance to build a strong emotional intelligence behavior among teammates in order to achieve the required objectives and target set for the team.