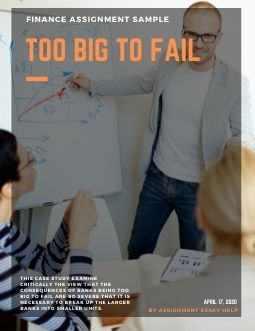 Examine critically the view that the consequences of banks being too big to fail are so severe that it is necessary to break up the larger banks into smaller units.
Finance Assignment Solution

Banking regulations and limitations:
There have been major banking reform legislatures that have been enacted to prevent any bank failures like during the 2008 recession. Dodd-Frank act is one of the important legislation which tries to discourage banks from taking too much risk. This act only facilitates structured resolution procedures for the financial institutions which go insolvent. While the act provides a broad framework but it is up to the individual regulators to define and implement the specifics.
Banks should have enough capital cushion in order to deal with tough economic situations. Banks that are considered systematically important will be required to hold a certain minimum capital buffer which will be almost double than the smaller financial institutions. This capital buffer requirement is often referred to as capital surcharge (spring, 2008).
Another important source of failure for banks is insufficient liquidity. During tough economic conditions, the banks face immense liquidity pressure and are often forced to sell even the illiquid assets at a huge discount to cover their operating cash requirements (Stern,2008). In order to prevent such scenarios, regulators ask the banks to hold a certain percentage of their total assets in the form of highly liquid assets. It was seen that before the crisis, most of the big banks relied on wholesale funding which is considered very risky. After the financial crisis, this trend has fallen.
Before the financial crisis of 2008, most of the top management and senior executives at large financial institutions had a large chunk of their compensation in the form of bonuses and stock options. The presence of stock options and variable bonuses was one of the major reasons why senior management and executives prefer short risky projects. With new regulations, most of the executive bonuses are deferred for a few years before being paid………………