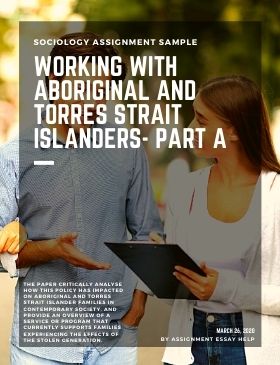 Choose ONE of the following topics:
1. “The most devastating policy under the Protectionist Act was that the State Government bodies were sanctioned and given the power to remove Aboriginal children from their families” (Westerman, 1997). Critically analyse how this policy has impacted on Aboriginal and Torres Strait Islander families in contemporary society, and provide an overview of a service or program that currently supports families experiencing the effects of the Stolen Generation.
2. “The relationship between social workers [and human services workers] and Aboriginal community members has often been experienced as problematic, underpinned by mistrust, fear, and anger” (Briskman, 2007). Critically examine why Aboriginal community members might be distrustful of social workers and human services workers within the policy context of the Stolen Generation era and discuss two (2) important areas of knowledge needed by practitioners to work effectively with Aboriginal people.
3. “The causes of the persisting poor state of Indigenous health are complicated but the continuing consequences of the colonial experience constitute an important dynamic in reproducing this poor health status”. (Public Health Association of Australia, 2010). Critically analyse how colonisation has impacted on the health and well-being of Aboriginal and Torres Strait Islander peoples in contemporary society, and provide an overview of a program or service that currently operates to enhance Aboriginal and Torres Strait Islander health.

The Aboriginals and Torres Strait Islanders are the native populations of Australia who habituated the region centuries ago. However, with the advent of Europeans, the original population of Australia came in constant threat which resulted in their marginalization  (Department of Human Services, 2009).  This group has ever since struggled with their identity and to date has not been able to make it to the mainstream population of Australia. Various laws, programs, and awareness have been carried out to provide safety and cultural awareness for the aboriginal population, but somehow all the strategies have failed to give this section the rights as first citizens of the Australian continent (Duthie, D., King, J. and Mays, J., 2013). Such marginalization of Aboriginal and Torres Strait islanders has also resulted in stereotyping them with a lot of preconceived notions by the so-called ‘white Australian population’. This section is a critique of my own understanding of the native population of Australia (Department of Human Services, 2009)
History and Challenges
The Aboriginals and Torres Strait Islanders inhabited Australia centuries ago, much before the Europeans came to know about it. They were the original settlers of this region and practiced a distinct culture that included hunting, gathering, fishing, etc. With the advent of European settlers, the aboriginal population were threatened because they did not have the latest technologies of the west and were terrified from the ships, guns, bombs, etc. it was easy to marginalize this section that had no representation in Australian society for several years (Duthie, D., King, J. and Mays, J., 2013). These years were denoted with slavery, lack of education, health facilities, basic rights, proper housing and sanitation and no say in political matters at all.  This oppression resulted in various challenges for the Aboriginals and Torres Strait Islanders and as a result, there was a clear demarcation between them and European settlers. The aboriginal children were separated from their families and were made to work for Europeans, they were sent to the school that taught nothing of their own culture, and in their own lands, the aboriginals felt alienated (Australian Council of Social Service, 2014). There was a major threat to the aboriginal culture as their roots were questioned and were looked down upon by the mainstream section of society…………..