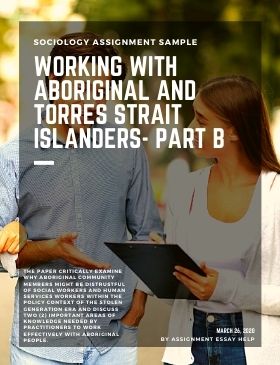 Choose ONE of the following topics:
1. “The most devastating policy under the Protectionist Act was that the State Government bodies were sanctioned and given the power to remove Aboriginal children from their families” (Westerman, 1997). Critically analyse how this policy has impacted on Aboriginal and Torres Strait Islander families in contemporary society, and provide an overview of a service or program that currently supports families experiencing the effects of the Stolen Generation.
2. “The relationship between social workers [and human services workers] and Aboriginal community members has often been experienced as problematic, underpinned by mistrust, fear, and anger” (Briskman, 2007). Critically examine why Aboriginal community members might be distrustful of social workers and human services workers within the policy context of the Stolen Generation era and discuss two (2) important areas of knowledge needed by practitioners to work effectively with Aboriginal people.
3. “The causes of the persisting poor state of Indigenous health are complicated but the continuing consequences of the colonial experience constitute an important dynamic in reproducing this poor health status”. (Public Health Association of Australia, 2010). Critically analyse how colonisation has impacted on the health and well-being of Aboriginal and Torres Strait Islander peoples in contemporary society, and provide an overview of a program or service that currently operates to enhance Aboriginal and Torres Strait Islander health.

The relationship between social workers and human services workers with Aboriginal community members have been problematic because of the history of indigenous Australia. After the colonization of Australia by Great Britain during the 18th century, the Aboriginals suffered from detrimental impacts that took various forms as they were removed from homelands, lighter-skinned aboriginals were removed from their families to assimilate the two races. As a result, the aboriginals have little to no control over their lives. In fact, the removal of lighter-skinned people continued till the 1970s, as many people thought it as the right manner of assimilation, which also became a formal institutionalized process. This period is known as the Stolen Generation Era. As a matter of fact, the social workers had a large role during this era because they also took part in this removal of lighter-skinned children (Duthie, D., King, J. and Mays, J., 2013, pp.197-212). There is no doubt about this institution impacted the lives and the whole generation of Aboriginals wherein they suffered from health and well-being problems and still continue to do so. In fact, the removal of lighter-skinned children was a highly specialized mission that was operated by greater authorities wherein, social workers and human services workers took active part and ensured that children are separated from their families. These children were also sent to English schools and adopted by British people where they were not treated properly and often found themselves completely alone, scared and in danger  (Duthie, D., King, J. and Mays, J., 2013).
Thus, there is a long history of social workers with Aboriginals and Torres Strait Islanders wherein they not only took part in the stolen generation era but led these children to separate from their families. Such traumatic experiences by Aboriginals and Torres Strait Islanders have resulted in distrustful, fear, anger and problematic relationship with the social workers which, has its roots in the historical era of the stolen generation and still continues.
Many policies were legitimized in this regard such as the Aboriginal Protection Act of 1869 is one of the earliest laws that enforced stealing lighter-skinned children from their mothers as a rightful act. Moreover, such powers were enforced by the Central Board for the Protection of Aborigines from 1860. This act gave several powers to the white-skinned people over aboriginals and mixed-race, wherein they could forcibly separate children from their families and especially girls, who were at greater risk. Similar acts were enforced as well namely, the Aborigines Ordinance 1918, the Aborigines Act 1934, Aboriginals Protection and Restriction of the Sale of Opium Act 1897 and Native Administration Act 1936 (Australian Council of Social Service, 2014). Such laws gave right to remove mixed-race children from their families and protectors who were appointed as guardians of aboriginals had several powers over these children up till the age of 21, wherein they also determined if these children could live or work or get married, etc. various agents of the state, including social workers and human services workers, were appointed to transfer babies and children and separate them from their aboriginal families to other institutions for care. It is estimated that approximately 100,000 children were separated and stolen from their families…………………….