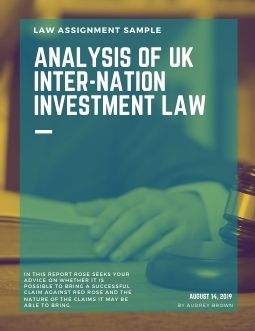 For further assistance in  Law Assignment help, please check our offerings in Law Assignment solutions. Our subject-matter-experts provide online assignment help to law students from across the world and deliver plagiarism free solution with free Turnitin report with every solution.

Hamlet Bank ('Hamlet') is proposing to enter into a 5-year bilateral $500 million loan agreement with Lear Ltd ('Lear') as Borrower. The loan agreement will be governed by English law and will be entered into on standard London Loan Markets Association (LMA) terms.

In providing your advice to Hamlet you should consider the terms typically included in a loan agreement entered into on standard London Loan Markets Association terms. You should also advise Hamlet of the potential liabilities in the event that it fails to comply with a compliant drawdown request.

White Rose Bank ('White Rose') is a syndicate lender in a $750 million loan (the 'Syndicated Loan') made available to Yorkie Ltd ('Yorkie'), a company incorporated in England. The Syndicated Loan was arranged by Red Rose Bank ('Red Rose'). Red Rose is Yorkie's 'house bank' and has made numerous loans to Yorkie over recent years. The Syndicated Loan was made available to Yorkie to finance its acquisition of Lancopia Inc ('Lancopia'), a company incorporated in Ruritania.

That acquisition was completed shortly after execution of the Syndicated Loan. Prior to execution of the Syndicated Loan agreement, Red Rose was made aware of concerns regarding the audited financial statements of Lancopia, including a possible failure to identify material contingent liabilities in those statements. Red Rose did not pass that information to White Rose nor did it include it in the information memorandum relating to the syndicated loan.

It now transpires that the quantum of the undisclosed contingent liabilities is likely to lead to the insolvency of Yorkie.

White Rose seeks your advice on whether it is possible to bring a successful claim against Red Rose and the nature of the claims it may be able to bring.

The foremost legal regime that governs international investment laws in the United Kingdom is the Bilateral Investment Treaties (BITs). There are numerous bilateral treaties that are entered by the United Kingdom with several countries. The number of bilateral treaties is amongst hundreds and all the treaties that are currently active can be located from the web link of Foreign and Commonwealth Office.  It is in 1975 that the first BIT was formulated between the United Kingdom and Egypt. The same was entered by the government of Northern Ireland and Great Britain with the government of Egypt and the main aim of the BIT was the protection and promotion of Investments. When compared to the other European countries, it can be submitted that the BIT concept was much prolonged and delayed[1]. Though in the latter half of 1970 there are few BITs that were entered by the United Kingdom with Indonesia, Singapore, Jordan, and Thailand.

It is around in mid 1990 that the expansion of BIT took place and the United Kingdom has entered into such treaties with the other countries. The main reason for the expansion is the disintegration of the Soviet Union and numerous prospects that were available in the Eastern and the Central Europe market[2]. The investment agreements that were entered by the United Kingdom were mainly based on the Performa that was established by it in 1990 when an investment agreement was entered by it with country X which was entered for the promotion and protection of investments[3].

When the Bilateral Investment Treaties are analyzed it is submitted that the investment treaties have granted significant protection and safeguard to the investors however a very limited effect has been analyzed within the legal framework of the United Kingdom. This can be specified by stating that the approach that is adopted by the United Kingdom while integrating its international treaty obligations in its domestic law is a dualistic approach[4]. This implies that the opportunities that can be availed by the investors are very limited by relying on the bilateral investment treaty in the national courts of the United kingdom unless and until such bilateral investment treaty is put into service a statutory enactment or instrument.

2.     Membership of European Community and the investment protection

The basic principle of which the European Union work was mentioned in Article 2 of the European Committee Treaty as amended by the Rome Treaty and is grounded on monetary and economic union and common market. The aim is inclusive of the fundamental that the protection must be granted to the international investments as well. The main principle of European Community Treaty is that it promises a right to the nationals for establishment between the member states. Further, Article 43 of the European Community Treaty allows the movement of capital amid the states that are a member of the community. Also, Article 56 of the European Community Treaty submits that the provisions of the treaty are allowed in the domestic courts however when there is a conflict between the national laws and the laws of the treaty then the latter will prevail over the former. The concept was rightly established in the leading case of R v Secretary of State for Transport, ex p Factortame Ltd (No 2)[5].[A2]

But, the exact scope of the European Committee on the international investment is not clear.