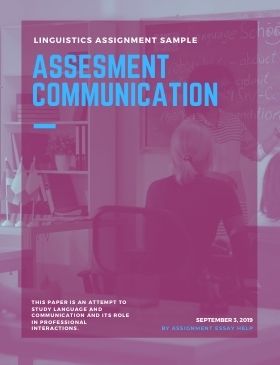 You can download the sample Linguistics case study on Assessment Communication with the following question for free at the end of this page. For further assistance with Linguistics Assignment help, please check our offerings in Linguistics assignment solutions. Our subject-matter experts provide online assignment help to Linguistics students from across the world and deliver plagiarism free solution with a free Turnitin report with every solution.

Keep a journal to record your observations of interactions that take place within an organisation to which you have some access (the organisation could be physical or online, and it could be the same organisation that you described in portfolio task 2). The time over which you keep the journal and the number and length of entries will vary depending on your access. Aim to keep the journal regularly for the equivalent of a week or so. Based on your journal entries,and drawing on relevant literature, explain the role of language(s) and communication in one or more interactions that you have participated in (or just observed) and that mattered to one or more participants. In doing so:

This paper is an attempt to study language and communication and its role in professional interactions. By placing my study in the purview of sociolinguistics and linguistic anthropology, the following discussions are an attempt to not only critically engage with specific linguistic patterns but also develop a nuanced understanding of the chosen organization's cultural milieu. The specific organization chosen for this case study is a publishing house that works on educational textbooks.

Approach, Methodology and its Limitations

For this study, I have mostly collected samples of the interaction of both formal and informal nature amongst editors themselves as well as different departments of the publishing house. The choice of my field hinged on two factors, ie accessibility and my familiarity with the profession. It warrants a mention at this point that I had a brief stint as an editor of ELT (English Language Teaching), which in certain ways aided in my interpretation on the interactions and in certain sense obscured my judgment, given my familiarity with its professional practices.

The interpretation of the data, and the scope of the argument thereof is limited by the level of accessibility and time constraints. I am also aware that my presence must have made them more conscious of their speech and hence altered its pattern to some extent. Care was taken not to note down the conversations as and when they were taking place even though the intention of my visits were made clear at the very beginning. This was done keeping in mind that the presence of a recorder or notepad might further make my informants aware of being recorded which then would have adversely affected their natural narrative flow

Going beyond the narrow understanding of institutions, scholars have described them as 'the way things are done'. (Jenkins 1996) Professions can be understood as social institutions with their own set of behavioral pattern and hierarchical order. The members of an organization have an unspoken but share knowledge and understanding of the behavioral norm. Inclusion into the profession or organization demands its member to conform to this set of unspoken, but widely understood and accepted norms. The access of this shared knowledge plays a vital role in the construction of the organization. It is this knowledge that creates a shared sense of how things are (and should be) done. (Sarangi & Roberts 1999) Much of this happens through everyday interactions and thus it is imperative to critically look at these events of communication in order to understand the relation between language and organizational culture. For instance, every profession has a set of specific nomenclature and commonly used register that becomes important in demarcating its members from the non- members and hence a newcomer has to observe and learn in order to get inducted in the group.

For my case study, the approaches taken to analyze my data were a combination of emic as well as etic approach. The collected data mostly comprise of informal conversations, narratives of what Candlin (2000) refers to as 'critical moments' in the professional lives of the informant as well as samples of e-mail exchanged between them and different departments within the same organization. I have interpreted these interactions as well as tried to include my respondent's interpretation of their experience and the importance of language in their professional lives. The following are an analysis of conversations that was observed over a period of nine days as well as responses of the informants on their understanding of their strategies used in professional communication.

On enquiring about the project at hand, one of the informants explained that she was working on a school textbook however, in the conversation with her collogue she refers to them not as a book but as 'printer's proof'. Many such examples of using professional jargon were observed in subsequent conversations. What is worth noting down from Example 1 and 2 is how respondant1 consciously choose not to use terms that might be unfamiliar to me and instead used a more generic term to talk about her work. This goes on to subtly show how I am deemed as the outsider to the profession. It is these specific jargons that mark a distinction between 'we' and the 'others' in a profession.