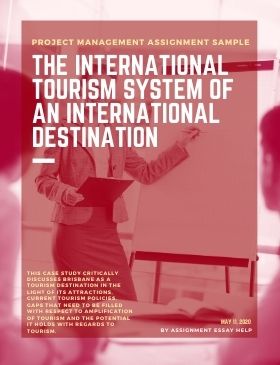 Identify the main issues for the destination and contrast these with concepts from at least ten (10) recent and relevant academic literature sources?

Introduction
Brisbane is the capital city of the state of Queensland, Australia. It has a significant role to play in the economy of Australia through the GDP it generates through tourism. In the year 2014, Brisbane was given the title of the “hippest” Australian city by the lonely planet (Petersen, 2014). This case study critically discusses Brisbane as a tourism destination in the light of its attractions, current tourism policies, gaps that need to be filled with respect to amplification of tourism and the potential it holds with regards to tourism.
Tourism stats of Brisbane
Brisbane has a population of almost 2.2 million people and is the third-largest Australian city and has an immensely diverse culture. Tourism is one of the most crucial pillars of Brisbane for its future growth and development. It has been observed (Planchat, 2014) that Brisbane is one of the richest sources of employment in the tourism sector of Australia. It has sunny weather throughout the year and offers immense opportunities for employment for tourists visiting Australia for work and tourism visit. Brisbane attracts a lot of tourists hunting for work on Fruit farms. As per statistics of (Tourism Research Australia, 2012) out of 54,653,000 tourists visiting Queensland between the years 2009 and 2012, 11,608,000 domestic tourists visited Brisbane for overnight and day trips. There is a much smaller deviation among the visit of international tourists visiting Brisbane though. Out of 1,994,000, international tourists visiting Queensland between the similar time period 839,000 tourists visited Brisbane on the overnight travel. 53% of these visitors visited the city with the sole purpose of holiday, 24% to visit family and friends and 14% visited the city for business. A very small percentage: 2% of these tourists visited the city for employment purposes. In terms of demographics, it is interesting to note that 58% of these visitors visited the city alone, 19% as couples and 11% in a group of family or friends. 47% of these tourists belonged to the age group of 15-34 years; 26% of which belonged to the age group of 25-34 years. A Similar majority of demographics in terms of the age group is witnessed among the domestic visitors. The biggest majority of domestic visitors, i.e. 41% visited Brisbane for eating at a restaurant and 22% percent for shopping. 5% of the tourists visited the city for clubbing (Tourism Research Australia, 2012)…………….