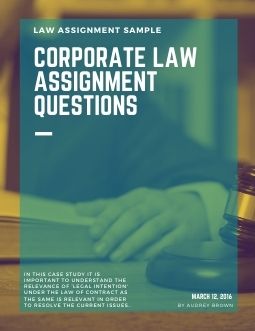 You can download the sample Law case study on Corporate Law Assignment Questions with the following question for free at the end of this page. For further assistance in Law Assignment help, please check our offerings in Law assignment solutions. Our subject-matter experts provide online assignment help to law students from across the world and deliver plagiarism free solution with free Turnitin report with every solution.

Just over two years ago, Jane bought a rundown coffee shop business and the premises at which the business was carried on. Soon after buying the business and premises, she had the shop refitted. This was done by her husband Edward, who runs a redecorating business. The cost of refitting the shop was $40,000. Jane did not pay this amount to Edward despite the fact that the original term orally agreed between them was that Jane would pay the full amount to Edward within a year. It was also orally agreed at the time that no interest would be payable on the debt.

The coffee shop business has proved very successful. Six months ago, the shop next door to Jane's was put on the market for sale. Jane saw this as a great opportunity to expand her business. She spoke to her bank manager about obtaining a loan to finance the purchase and redecoration of the adjoining shop. The bank manager was concerned that Jane had not yet paid her outstanding debt to Edward. Furthermore, if Jane did pay this debt, it seemed that she would not have quite enough capital to meet the bank's lending rules. Jane explained this situation to Edward. She said she was very keen to buy the shop but she could only do so if he would accept $10,000 in full and final settlement of the outstanding debt. Edward agreed to this and they wrote their agreement on a sheet of paper and both signed it. Edward's reason for agreeing to this arrangement was partly because he wanted to help his wife and partly because he assumed that she would hire him to redecorate the new shop. Jane produced the signed written agreement to her bank and, because of it, was able to get a bank loan and go ahead with the purchase of the shop next door. Jane then arranged for the shop to be redecorated but she did not engage Edward to do this. Instead, she hired Max who operates a decorating business across the road from Jane's coffee shop business. Jane has paid Max $25,000 for redecorating the shop.

Jane has since spent a lot of time socially with Max and has now declared her wish to end her marriage to Edward and start a new relationship with Max. Edward is outraged at Jane's declaration and his first response has been to sue her for the $30,000 that he claims is outstanding from his refitting the coffee shop.

Advise both parties about their legal position in respect to this dispute between Edward and Jane.

Jean was a regular shopper at Is Top Star Supermarket liable in negligence for Jean's injury?, which was part of a large nationwide supermarket chain. She was there at least once a week and sometimes more often if the specials were really good. When Jean was there this week, she slipped on some grapes in aisle 3 and broke her ankle. Grapes are normally found in the fruit section of the store and the store was not sure how the grapes got there or how long they had been there. The store manager indicated that there were a number of spillages every week in the aisles in this store.

Is Top Star Supermarket liable in negligence for Jean's injury?

The main issue is whether Edward has any right to claim his outstanding $30,000 from Jane for refitting the coffee shop.

Under the Australian contract law, an agreement which is formed with the intention to enforce it legally is termed as a contract. However, to form a valid contract there are few essentials which must be present, such as, offer, acceptance, consideration, intention and capacity. (The Law Handbook, 2015)

All essentials are relevant in order to establish a valid contract.

It is important to understand the relevance of 'legal intention' under the law of contract as the same is relevant in order to resolve the current issues.

The legal intention is a contract element which must be present in order to form a valid contract. Legal intention submits that the party to the contract must have intention to abide by the contract legally, that is, whenever there is a dispute amid the parties then they are willing to resolve their dispute in the court of law and is held inRose and Frank Co v Crompton (1923). However, the presence of intention must be analyzed by understanding the scope both under the domestic and commercial relationship amid the parties. (Moles R, n.d)

But the assumption was found to be negated by establishing the fact that the parties though are in family/domestic relationship but still intends to enforce the intention established between them legally, that is, they establishes a contract which has the enforceability of law and is held in Balfour v Balfour (1919)…

The facts submitted that Jane has bought a coffee shop (premises) and the business. The shop was refitted by her husband Edward after the purchase and cost @ $40,000. Both Jane and Edward had orally agreed that Jane will pay the cost of the fitting to Edward within a year (without interest) however the same was not done by her. She also intends to buy a shop but was short of finance. Edward took $10,000 in full and final settlement of his claim in order to help his wife (can take a loan from the bank) and an assumption that he will be hired as a decorator for the new shop…

The main issue is whether the supermarket is liable for the injury of Jean under the law of negligence?

The law of negligence is a very important principle under the tort law. The law of negligence implies that a person is under a legal duty to protect his neighbors. The law was developed in Donoghue v Stevenson (1932) and has developed with several leading case such as Anns v Merton London Borough Council (1977) & Caparo Industries plc v Dickman (1990). Mainly a person is said to be negligent when he is imposed with a legal duty to protect the plaintiff but violates the same resulting in damage to the plaintiff. (Phang et al, 2006)

The facts submitted that Jean was a frequent visitor to Top Star Supermarket. However, one day she slipped on some grapes in aisle 3 and broke her ankle.  Normally, the grapes are found in the fruit section of the store and the store was not sure how the grapes got there or how long they had been there.  The store manager indicated that there were a number of spillages every week in the aisles in this store.