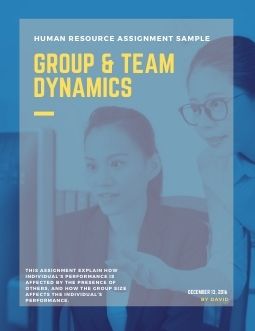 In the perspective of group behavior and team dynamics, it is important for us to understand the nature of groups and teams. In organizations, most of the work is done by people working in teams and groups and hence importance of group behavior and dynamics is very important in organization learning. People are attached together through various relationships and variables acts for smooth running of the groups and organizations. This functioning and interrelationships of individuals within/outside the group and amongst the group is known as group dynamics. Group Dynamics discusses on the nature of groups- the variables governing their formation and development, their structure and their inter relationships with individuals, other groups, and the organizations within which they exist (Greenberg & Baron, 2008). Group is a collection of two or more than two individuals maintaining the same stable patterns of relationships, goals and perceiving themselves as part of the group (Forsyth, 2010).

Drive theory of social facilitation – This theory says that, the presence of others increases emotional arousal, which increases the tendency to execute the most prevailing responses (Weiss & Miller, 1971). If these responses are correct they lead towards improved performance otherwise, performance is hindered

Several researches have supported for the advantages of this theory by proposing that people remain concerned, if others judge or evaluate their performance and are present during work. They fear what others will think about them if they did not perform up to the mark.

(Latane&Nida (1980) gave the social impact theory based on three rules.

Tuckman (1965) presented four-stage model for team development; the stages in this model are dependence, conflict, cohesion and functional roles. Tuckman's model is also known as FSNP (Forming, Storming, Norming and Performing) and is extensively used in organizational context. The author also proses that a good fit between observed stages and the proposed model exists.

Though the model fits well and is conceptually sound but lacks in empirical validation. Ingram et al (1997) states that despite the importance of research in team building much of the literature is inconclusive and is anecdotal.

Most researchers have toiled in the area of knowledge procurement and proposed that direct experience is the most vital part in knowledge creation. ELT is most widely used theory in the domain of management learning research. ELT was given by Kolb (1984)  defining learning as, 'the route whereby knowledge is formed through the alteration of familiarity. Knowledge results from the combination of acquisitiveness and altering experience.

In the year 1984, David A. Kolb, given the most acknowledged model on experiential learning advocating experience as the most important factor in learning.

There are following four stages.

Burnard (1989) states that, action and reflection are the two important sources of experiential learning. The term Praxis is originated from Karl Marx work in the 1840's and Paulo Freire.

Prof. Robert Karplus gave the learning cycle theory in the year 1967 and is accepted for science education. He gave three phases of experiential learning that time and is now described by Lawson et al (1989) as learning cycle model. In this model three phases- Term introduction, exploration and concept application are performed in stages. Several studies have supported for this theory when used in science education (Bredderman, 1983; Cohen, 1992; Hartshorn& Nelson, 1990; Shymansky, Kyle, &Alport, 1983)