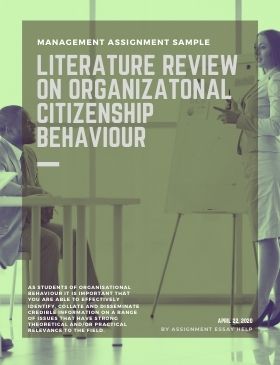 Task: Undertake a Literature Review (max 1500 words) on ‘the Dimensions and Antecedents of Organisational Citizenship Behaviour (OCB)’. The review is to focus solely on refereed academic publications (i.e. journal articles).
Purpose: As students of Organisational Behaviour it is important that you are able to effectively identify, collate and disseminate credible information on a range of issues that have strong theoretical and/or practical relevance to the field. Such information will often provide the basis for effective planning and decision-making.

Organizational Citizenship behavior (OCB) is referred to as the discretionary behavior exhibited at the workplace, which exceeds the basic job requirements of the employee. Such behavior goes generally beyond the call of the duty. According to (Organ, 1988), OCB is a kind of ‘Extra role Behavior’. Originally the concept of OCB was studying in the US by (Smith, et al., 1983), who refers to it as the behavior, which is not formally requested of the employee but can play a functional role in the operations of the organization. In understanding the concept of OCB, two different approaches have been identified, namely, ‘role behavior’ and ‘extra-role behavior’ (Organ, 1997). While ‘role’ behavior is concerned with the expected chores of an employee within his job responsibilities, ‘extra role’ is something which goes beyond the basic job requirements. However, (Castro, et al., 2004), argues that it is tough to distinguish the two kinds of performances, as perceptions of performance may find a huge variability amongst the employees and managers.
Literature Review (Importance of OCB)
For the long term survival and prosperity of an organization, it is imperative for the citizens to engage in positive behavior. Because of the growing importance of OCB, and its significance, understanding the sources of OCB, its dimensions, and antecedents, has been an important area of interest for organizational scholars (Organ, 1988). According to (Williams & Anderson, 1991), OCB can have a direct impact on productivity, group activity coordination, stability, performance enhancement, and the ability of the organization to adapt to dynamically changing business environment.  (Podsakoff, et al., 2000), opines that although beneficial to the organization, such behavior cannot be ‘demanded by force’. Similarly, even the employees do not expect any form of direct rewards for OCB, although it does not get unnoticed. Most of the time it sounds an indirect recognition in the form of preferential treatment, high-performance ratings, and effective promotions (Podsakoff, et al., 2000)……………………..