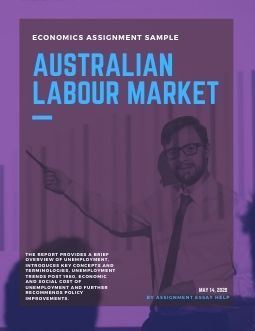 1. Give brief background to labour market in Australia and unemployment, briefly explain scope of report and core concepts that will be discussed; tell the reader what the report will cover?
2. Define and describe each type of unemployment; give examples of each type; explain the differences and impacts; support with theory/ research using references; link back to your main topic on unemployment in Australian labour market.
3. Define/explain using examples from different sources; loss of GDP (i.e., lost output); increase government outlays (increased unemployment payments); individual cost (lost income and associated social costs); give examples; support with research and references.
4. Define and discuss appropriate policy response for each type of unemployment; cyclical unemployment (e.g., expansionary fiscal or monetary policy); frictional unemployment (e.g., policies to improve matching of job seekers to employers); structural unemployment (e.g., worker re-training; provision of subsidises to encourage businesses to hire the long-term unemployed); use Australian policy examples.

Introduction
Over the past years, the Australian labour market has undergone a profound transformation. Unemployment and its role in the labour market have always been a topic of concern and interest for intellectuals. The recent trend in the Australian labour market shows a drop in unemployment to 6.1% but the problem of underemployment or unavailability of enough work has been constant. The country is also failing to produce enough jobs for its younger workers. (Smyth, 2015) This report dwells more on the Australian Labour Market and its intricacies. The report provides a brief overview of unemployment, introduces key concepts and terminologies, unemployment trends post 1980, economic and social cost of unemployment and further recommends policy improvements.
Unemployment in Australia: Definitions and Trend
The Australian Bureau of Statistics is the key authority responsible for publishing unemployment data. The data is published monthly from the Labour Force Survey. The below- mentioned definitions are followed while presenting the data. (Labour Market Statistics Section, 2014)
Labour Force: Total number of people who are willing to work are counted in the labour force. (Labour Force, 2012)
Unemployed Person: The following three conditions need to be met to count a person as unemployed
1.  one who is not working for more than one hour;
2.  one who is looking for work; and
3.  one who is available to start work
(Labour Market Statistics Section, 2014)
There can be people who want to work but cannot start working at the moment. They are not considered unemployed and are not counted in the labour force. There can be another set of people such as discouraged workers who have given been looking for a job but want to work. Hence, to differentiate between a person who is unemployed and a person who is not in the labour force, we need to consider the above- mentioned cases as well…………….