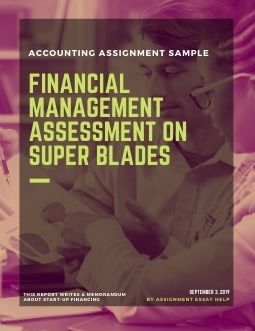 You can download the sample Finance Resource essay on  Financial Management Assessment on Super Blades with the following question for free at the end of this page. For further assistance with Finance Assignment help, please check our offerings in Finance assignment solutions. Our subject-matter experts provide online assignment help to Finance students from across the world and deliver plagiarism free solution with a free Turnitin report with every solution.

FT Lexicon defines crowdfunding as a new and emerging way of funding new ideas or projects by borrowing funding from large numbers of people often accessed through a website. Although crowd funding started as a way of raising capital for start-ups, even larger and already established firms can use this financing channel to raise money. In your region, you can access more information about crowdfunding through Crowdonomic, a website for Asian crowdfunding sources, which launched in Singapore in 2013 (the website address is https://www.crowdo.com).Your uncle, an experienced engineer, is considering a proper development of his business idea – to manufacture blades for fans produced by larger firms. Your uncle has a clear
technological advantage over competitors as he came up with a revolutionary galvanizing process for blades which offers huge cost savings. He has also an extensive managerial/operational experience – in addition to it he is already running a very small operation in his garage under the name Superblades. What he lacks is the necessary funding to finance the new venture – and he hopes that you, as a UoB finance student, will be able to help him in his project which you should treat as a start-up firm.
For a start, he asked you to write him a memorandum about start-up financing – how a small company is usually financed. He is particularly interested whether he will be able to borrow money from the bank from the early days of his company's existence.
Only yesterday he received a trial contract from the UK firm to deliver his blades. The contract is in GBP for £50,000 payable in one month's time, there is no credit risk arising from this UK client yet there is still the exchange rate risk and that is why your uncle wants you to hedge against currency movements. You know that he will have to pay its suppliers and employees in Singapore Dollars (SGD) and that he prefers to use forward exchange
contract.
FM Coursework, Kaplan Singapore, 2015-16 Page 3
Please prepare a memorandum to answer your uncle's questions. In particular, in very
clearly separated sections, please:
1. Identify the sources of finance in different growth stages of the company, – 40 marks
2. Describe banks' preferences while lending to companies in general, – 10 marks
3. Using 5 factors of your choice assess the role which crowdfunding might play in his
venture and in what stage it might become a realistic financing option – 20 marks
4. Define a forward exchange contract and explain why would you like to use this
protection and – 25 marks
5. Clearly show your calculations and flow of hedging transaction – 5 marks

BODY OF THE PAPER:

There are critics who justify these nude portrayals by saying that it helps in releasing the work or school pressure from the minds of the men. In what ways can this justification be analyzed is one of the purposes of the present paper? The author presents a continuity of this female sexuality in cartoons and in the corporate get-together parties. According to her, there is a special attraction to have verbal sex in such parties with the women of different class. If the men cannot establish a relationship with the women of a different class and status, they like to gaze them or have the verbal sexual conversation in order to satisfy their inner desires. Freud's theory of scopophilia, the pleasure in looking, explains the genital process and progress in young boys when they look at the naked female bodies (Allison, 2000: 34)[1]. They develop a sexual object at the time of puberty by doing so. The author tries to deconstruct the acts of viewing by Freud's analysis. This looking becomes perverse when it hegemonizes a sexuality and when it is used aggressively.

Tezuka has made some deliberate change in order to make Buddha's story an adventurous tale. His five important changes can be accounted as 1) turning the story into an adventurous tale; 2) visualization according to manga conventions; 3) contextualization in order to make it a Japanese story; 4) use of nature to convey spirituality and human emotions; and 5) reorientation of the story towards the problems of young Japanese boys (MacWilliams, 2000: 112). Tezuka without going into Buddhist doctrines explains some basic teachings as Four Noble Truth by Buddha[2]. Tezuka puts his readers in shock by presenting unconventional visuals of Buddha. He doesn't portray the famous Sambhogya-Kaya, the devotional image; instead, his Buddha is a human being- alive, sitting and posing in different ways. Tezuka tries to address 'the otherness', and in a vein to sort it out, he contextualizes the story for a Japanese audience. He presents the view of the natural world setting his hero surrounded by little furry animals[3].

The author's analysis based on Machiko-sensei, a cartoon show in Japan, presents how she was embarrassed when her male competitor wrestler cuts the strap of her top and her breasts come out. Every male member starts staring at her breasts but nobody comes to assist her. Critics who studied the aim of manga readers argue that they read it for excitation or genital release (Allison, 2000:45). But the immobilizing effect in the situations where a naked girl is hung in an open place, and everyone stares her infix is greater than the sexual excitation. The image and gazing in the Japanese cartoons work as the construction of sexuality. The author concludes by saying that the stare at female nudity results in social disruptures in the lives of the boys (Allison, 2000: 49).

What remains the striking point of Tezuka's shift is an attempt to attract his young audiences. He shows that to get rid of the sufferings of life, Buddha loses his mother. He gets peace and salvation through renunciation and meditation. The loss of Buddha's mother, Maya during his birth and the loss of his first love, Migeera are the defining points of Buddha flight and his tragedy (MacWilliams, 2000: 132). In short, we find that the author MacWilliams has succeeded in providing us a picture of how the manga cartoons and comics succeeded in having a deep effect on the mind of the children. Whether it is about sexuality or religion, Japanese manga has proved its rampant influence over the mind of the people.

[1] Freud's Three Essays on the Theory of Sexuality published in 1905 explains the young boys' sexual development while gazing the nude bodies.
[2] Budda written by Tezuka focuses on young boys for he aims to prevail the Buddhist philosophy and basic teachings in their early life so that they can follow it thereafter.
[3] Tezuka has borrowed Walt Disney's 'feel good' anthropomorphic view of nature. He liked to evoke feelings in these ways for mass audience.