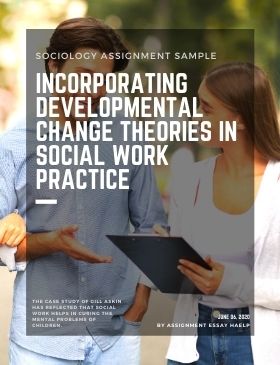 This task assesses the students capacity to demonstrate their understanding of developmental change as a key component of social work with children, young people and families.

Social work helps the children to get rid of the problems related to mental and physical health. In the case of Justin Askin, the researcher has seen that mental health has been affected by the background of the family and the present condition of the parents. In this context, it is to mention that the family life cycle stage of the children influences the mental health of the children, and therefore, the focus shall be made in the assessment of the development stage of the children of Gill Askin. Initially, the concentration would be made in the overview of the social welfare theories. As the children of Gill Askin have faced different phases in growing up, the impact of the change in the environment at the time of growing up could be reflected in the case study; therefore, the researcher shall concentrate on this issue for analyzing the developmental change. Finally, the discussion is to be made on the impact of the developmental change in the mental health of Justin Askin and the theories of social work.

Overview of the theories and concepts

The case study of Gill Askin has reflected that social work helps in curing the mental problems of children. Moreover, the study has disclosed that Eclecticism and its effectiveness have been seen in the case study as the affected child has lost mental stability due to the developmental change. According to Jones (2016), Eclecticism is a special concept that considers multiple paradigms for applying social practices. On the other hand, it is to mention that this theory focuses on the responses that the social work practitioners make in improving the mental health of the patients. The direct eclecticism approach prescribes the treatment of the patients by considering the empirical pieces of evidence. In this context, it is to mention that the therapy techniques under the eclecticism theory could be helpful. Empirically Supported Treatment (EST) Movement researches different outcomes of treatments made on mental patients (American Psychiatric Association, 2013). Therefore, it can be said that the empirically supported treatment mechanism emphasizes the basis of results, not upon the ability of patients to respond to a particular situation or environment.

Attachment theory considers that the attachment with family members helps to improve the stability of an individual. In this context, it is to mention that the identity crisis could also be avoided by improving the attachment to the person (Coady& Lehmann, 2016). In the case of Justin, it has been seen that the degree of attachment of the child with his mother was low. Therefore, it can be said that the mental instability of Justin was the result of a lack of attachment with the family members, including the mother. In this context, it is to mention that children below five years of age are affected by a lack of attachment with the parents, and therefore the separation anxiety and stranger anxiety enhance among the infants.

The parent-child relationship theory suggests that the relationship between the parents and the children affects the mental health of the children. As opined by Coady& Lehmann, (2016), the parent-child relationship theory considers the identification of the process of beginning the mental instability of the children as the base of treatment. However, child development and trauma care activities would also be made by considering personal beliefs (Rogers & Pilgrim, 2014). Therefore, the treatments of the patients are to consider the proper study of the personal beliefs of the parents as well as of the children in evaluating the case provided here that the behaviour of the father can be considered normal in terms of psychology. It can be stated here that it is in human psychology that they are prone to change partners if they feel incompatible with one another. In this regard, it can be stated here that Fred asking was facing a similar situation (Christophersen&Vanscoyoc, 2013).  This kind of situation is not the first of its kind; similar situations have been evident from the empirical analysis made in the different nature of the world. It has also been evident from different case studies that these kinds of situations have a consequent effect on the family and on the person as well. From the point of view of the psychologist, it can be stated that the problems arise because of the emotional bondage that one has with the other. Moreover, it can be stated here that personal behaviour is affected by the philosophy that the person adheres to (Zablotsky, Bradshaw & Stuart, 2013).  In this case, it has been evident that the person is an atheist, and therefore it has been empirically proven that an increasing number of people who are atheists have a similar sort of a philosophy where bonding to them is not of primal importance, but compatibility plays a vital role. It has also been evident that similar people are subscribers of eclectic concepts (Rogers & Pilgrim, 2014). These people are expected to have a wide range of focus rather than being narrowed down to a single point. Here it has been evident that the case of FredAskin.