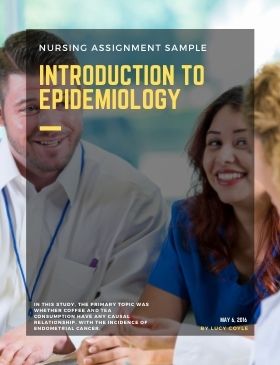 You can download the sample Nursing case study on Introduction to Epidemiology with the following question for free at the end of this page. For further assistance in Nursing Assignment help, please check our offerings in Nursing assignment solutions. Our subject-matter experts provide online assignment help to Nursing students from across the world and deliver plagiarism free solution with free Turnitin report with every solution.

Describe the evidence presented in the paper you selected. Specifically address the following questions:

-What was the exposure or intervention?

-What was the outcome?

-What was the study design?

-What was the study population?

-What were the main findings?

Do you think there is evidence of a causal association between the exposure and the outcome? This question relates to the internal validity of the study. Consider the following questions in your critique:

-Is there a temporal relationship between exposure and outcome?

-Is there a strong relationship between the exposure and the outcome?

-Is there a dose-response relationship between exposure and the outcome?

-Are the results consistent within the study?

To what extent can the observed association between the exposure and outcome be attributed to non-causal explanations? Consider the following questions in your critique:

-Are the results likely to be affected by selection and/or measurement bias?

-Are the results likely to be affected by confounding?

-Are the results likely to be affected by chance variation?

Do the findings accord with other evidence? Specifically:

-Are the findings consistent with other evidence, particularly evidence from studies of similar or more powerful study design?

-Are the results plausible in terms of a biological mechanism?

Are the findings externally valid, that is generalisable? Specifically:

-Can the findings be applied to the source population from which the study population was derived?

-Can the study results be applied to other relevant populations?

Solution 1: Describe the evidence presented in the paper you selected.

I have chosen McCann et al. (2009) for this assignment. In this study, the primary topic was whether coffee and tea consumption have any causal relationship, with the incidence of endometrial cancer. Hence, the primary explanatory variable in this case was beverage consumption expressed in terms of consumption of normal coffee, decaffeinated coffee, and tea. Other considered confounding variables were: age, body mass index or BMI, education level, menopausal status, hormone replacement therapy, oral contraceptive, 'ever pregnant', smoking status…

Solution 2: Do you think there is evidence of a causal association between the exposure and the outcome?

Concluding causal association between the exposure and the final result is one of the challenging tasks in Epidemiology. This is particularly because the observed significant statistical relationship between the exposure and the end result, may not always ensure the presence of a casual relationship. The process of concluding a causal relationship between exposure and outcome in Epidemiology actually goes far beyond a significant statistical association found in one study and includes criteria like the magnitude of the association, the uniformity of findings from other studies, and biological plausibility (Hennekens et al., 1987)…

Solution 3: To what extent can the observed association between the exposure and outcome be attributed to non-causal explanations?

Solution 4: Do the findings accord with other evidence?

According to the author of the considered study, very few studies have actually explored the relationship between the intake of coffee and tea, and the potential danger of suffering from endometrial cancer. Still, limited prior literature also seems to suggest that, there is an inverse relationship between tea and coffee consumption and the chances of suffering from endometrial cancer. Comparatively, recent study by Je et al. (2011), show that women who consumed more than three cups of coffee had 25% lower endometrial cancer risk than those who consumed less than one cup/day. This finding is completely consistent with the findings of the considered study. Similarly, Giri (2011) also finds that normal coffee can be protective for endometrial cancer. Although there are a few studies (Weiderpass et al., 2014; Yang et al., 2015), which show that there is a very weak relationship of no significance, between the concerned exposure and the results, there are no studies which show completely opposite finding (a positive relationship between the exposure and the outcome) than the concerned one…

Solution 5: Are the findings externally valid, that is generalizable?

As already indicated, the study population for this study is the women who came to RCPI, Buffalo, in between 1982 to 1998 with a suspicion of neoplastic disease. In the following points, I have delineated why the finding of the study can be easily generalizable to this study population. The strength of the study is that it has a substantial amount of data for both the cases and the controls. This large availability of data over a quite a large stretch of time really makes the finding of this study robust. Moreover, the availability of extensive epidemiologic data on those women provides sufficient scope to counter the effect of confounding variables, which is particularly important in the case of observational study design (Jepsen et al., 2004)…