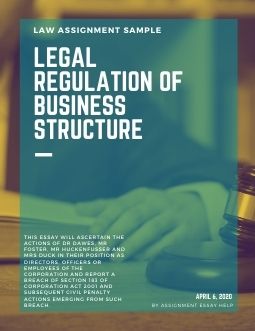 QUESTION:
Dr Dawes declared personal bankruptcy on 28 February 2016 and he remains undischarged. He informed the board of GML (refer to the facts of this company in your text book) of this bankruptcy at the first meeting that followed, on 5 March 2016, which was attended by all GML directors. At this meeting, the board accepted Dr Dawes’ resignation from the board. However, the board unanimously resolved that Dr Dawes should still attend all board and committee meetings, involve himself fully in discussions and votes and continue to draw directors fees as a “Consultant Director”. They were anxious not to lose his expert mineralogical knowledge.
On 2 April 2016, the full board met again to discuss a proposal by Mr Boon to purchase a majority shareholding in Menzies Mining Machines Ltd (MMM). MMM was then a profitable and publicly listed Australian Company with three million shares on issue at a current price of $4.80 per share. Mr Boon presented an audio visual display to the board. The GML board was impressed and considered that a purchase as suggested would increase GML’s prestige in the industry in addition to adding to GML’s profitability. The board resolved that Mr Boon and senior management proceed with a view to commencing the transaction this financial year and prepare a detailed Market Bidder’s Statement.
Mr Foster resigned as a director on 30 April 2016 and took up an executive board position with as CFO with Queensland Equity Capital Group Ltd (QECG) on 5 May 2016. Mr Foster also holds 12 other board positions with family and charitable companies. His first recommendation, to his new employer, was to secure a parcel of shares in MMM based upon “confidential intelligence”. QECG immediately purchased 60,000 shares at $4.70. On 7 May 2016, after a regular GML board meeting where the MMM purchase was discussed, Dr Dawes’ wife personally purchased 20,000 shares of MMM (at $5.00 per share) in her own name on her husband’s recommendation, although he did not tell her why.
Mr Huckenfusser has been employed as an Audio Visual Technician by GML for five years. Part of his duties is to assist with board meetings and he had been present in the board room with Mr Boon when he raised the purchase of MMM shares. Mr Huckenfusser’s sister-in-law (Mrs Duck) had been pestering him for stock tips for months. She agreed to forgive Mr Huckenfusser’s personal debt to her of $5,000 for any useful information. Mr Huckenfusser told her about the board meeting and she purchased 5,000 MMM shares for $5.20 per share on 15 May 2016. By 6 June 2016, MMM were trading at $12.05. On this day, Mrs Duck sold her shares and realised a profit.
On 12 June 2016, Mr Boon suggested to the board that the time was no longer ripe to continue with the MMM purchase and the board resolved to end the matter and make no bid announcement to the Exchange. Ms Dawes sold her MMM shares at $12.70, on instructions received from Dr Dawes by telephone, 10 minutes after the board meeting ended. MMM’s share price quickly collapsed and by 30 June 2016 they were trading at $3.20. QECG retained their MMM shareholding.
The ASX investigated these matters, established the above facts and reported to ASIC under section 792B(2)(c). The board of GML met and resolved to take no action against any of the above. However, the ASX reported these issues to the ASIC. You have recently graduated from USC and have immediately obtained a position as an Analyst at ASIC. You are tasked with reporting on any breach of section 183 of the Corporation Act (Cth) 2001 against Dr Dawes, Mr Foster, Mr Huckenfusser and Mrs Duck and subsequent Civil Penalty action only. Do not discuss any other offences or actions.

It is the duty of the director to act with all good faith, honesty and in the interest of the corporation. The acts of the board member shall correlate to the proper purpose which may include making prudent decisions even detrimental to themselves or someone they know. In order to determine proper, we must understand what an improper purpose is. The improper purpose is those which are laid down by the law under section 183 of Corporations Act 2001 and through various opinions of the court. Over the course, this essay will ascertain the actions of Dr Dawes, Mr Foster, Mr Huckenfusser and Mrs Duck in their position as directors, officers or employees of the corporation and report a breach of Section 183 of Corporation Act 2001 and subsequent civil penalty actions emerging from such breach.

Preliminary Issues
Dr Dawes was declared personally bankrupt on 28 February 2016 and due to operation of Section 206Bof the Corporations Act 2001 is automatically disqualified from managing corporation. The fact states that the board accepted Mr Dawes resignation. However, they decided that he should still attend all meetings related to the board & committee. Also, he is expected to involve himself in discussions, any voting activity and collect director’s fees for the position of “Consultant Director”. It is not clear whether such subsequent appointment is approved either under Section 206F or Section 206G of the Corporation Act 2001……………….