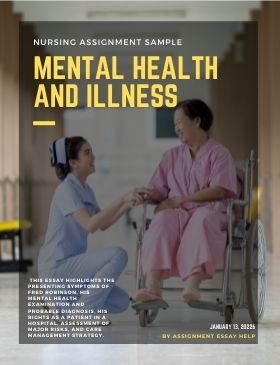 Mental health can be termed as “a state of well-being in which every individual realizes his or her own potential, can cope with the normal stresses of life, can work productively and fruitfully, and is able to make a contribution to her or his community” (World Health Organization, 2014). Mental illness or disorder refers to a health problem which considerably affects in a way in which a person thinks, feels, behaves, and relates to other people. It can be diagnosed as per standard criteria. In Australia, it is suggested that about one in five people may experience a mental health problem at some point in their lives (Department of Health, 2007). In the present case study, Fred Robinson is a youth who is suffering from a serious mental illness which requires immediate attention. This essay highlights the presenting symptoms of Fred Robinson, his mental health examination and probable diagnosis, his rights as a patient in a hospital, assessment of major risks, and care management strategy.

Mr. Fred Robinson is a 24 years old young male from the city of Derby located in the Kimberly region of Western Australia. He has a supportive family comprising of father, mother, three brothers, and friends. Fred was missing from home for five days. He usually presented himself well but when he was found by police he was in a very untidy state, unclean and wore a single shoe. In his bag, he carried ripped clothing and papers and an unlabelled medicine bottle that contained numerous coloured tablets. The police escorted him to a public hospital when he was found muttering to himself and was observed attempting suicide by pacing towards a railing of a bridge next to a railway yard. Fred was uncooperative, restless, accused police of stealing his thoughts, yelling, overactive and sang loudly. He even attempted to harm one of the policemen. On police investigation, Fred’s parents informed that he had been hearing voices telling him to jump down from a bridge near his hometown. At the public hospital, the doctors sedated him and referred him for admission in an ‘approved hospital’ at Perth.

In the present case study, Fred is a youth who was missing from his home and was experiencing anxiety, auditory hallucination, and suicidal tendencies. Also, he carried an unlabelled medicine bottle with many multi-coloured which predisposes him with to risk of drug abuse. The patient was aggressive and was capable of harming himself or other people. Psychiatric mental health nursing care comprises of core elements such as comprehensive, patient-centred care and care of mental disorder. In providing care the nurse has to adopt a more intensified care with a twenty-four-hour care ensuring safety, and crisis intervention strategy with a linkage with non-mental health departments (Australian Nursing & Midwifery Federation, 2015). The nurse should ensure that the patient is given appropriate medication under supervision to avoid medication errors. Self-efficacy described as a belief that one as the capacity to implement behaviour required to produce the desired result (Kadden, 2011). In the present case study, the patient had shown suicidal tendencies which demonstrate a very low self-efficacy in dealing with stressors. So, some of the important components of care should include care support, medication, education and counselling for best treatment outcomes (Australian Nursing & Midwifery Federation, 2015). Social integration of the patient with family and friends and active participation of the family in care activities can accelerate the process of recovery and promote mental health in the patient. (Waidman, Marcon, & Pandini, 2012).