A Research Project In The Area Of Education - Skip to content 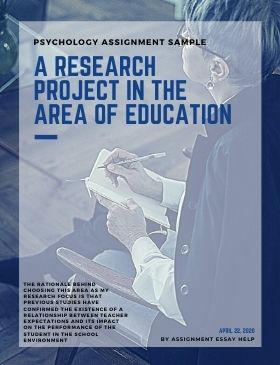 You can download the sample Psychology essay on CUC100 Assignment: Annotated Bibliography with the following question for free at the end of this page. For further assistance with Psychology Assignment help, please check our offerings in Sociology assignment solutions. Our subject-matter experts provide online assignment help to sociology students from across the world and deliver plagiarism free solution with a free Turnitin report with every solution.

The rationale behind choosing this area as my research focus is that previous studies have confirmed the existence of a relationship between teacher expectations and its impact on the performance of the student in the school environment (Südkamp, Kaiser, & Möller, 2012;  Nash, 2012), but these studies did not address the impact of these beliefs and ideas of the teacher on student evaluation.
Assessment is the core of the educational process (QCA, 2010) especially at the Ph.D. level (Petre & Rugg, 2010), where the focus of the study is very specific and the student has chosen the area of interest in which he or she is going to work for the rest of their professional lives. Being an important milestone in the professional life of the student, Ph.D. assessment becomes a very important part of the education process as it is the reflection of student achievement from the point of his/her academic supervisor. Besides, since at this level the stakes of academic achievement are very high, student behavior is also affected by the teachers’ perception of their potential and this is where the impact of national stereotypes in the case of international students is seen to be significant.
My research will study the impact of the general stereotype of Saudi Arabians on student evaluation, specifically Saudi Ph.D. students as there are many Saudi Arabian students enrolled in the Ph.D. programs in UK universities. My study will also try to establish if there is a relationship between the cultural differences in the teaching systems of Saudi and British educational systems and the evaluation of Saudi Ph.D. student in UK universities.
There are many cultural differences between the societies of the UK and Saudi Arabia that have given rise to the general stereotype of Saudi Arabians in the UK– the major differences can be summed up in the context of the UK belonging to individualist culture and Saudi Arabia belongs to a collectivist culture  (Biddle, 2014). This concept pioneered by Dutch sociologist Geert Hofstede’s cultural dimension theory is useful for comparing individuals thinking in society (Hofstede, Hofstede, & Minkov, 2010). From the four dimensions of national culture identified by Hofstede, I find the collectivist nature of Saudi society and the power distance between student and tutor in the Saudi education system (Smith & Abouammoh, 2013;  Alhwiti, 2007) to be very relevant to the behavior and attitude of Saudi students in the UK. Unlike home students from the UK, a Saudi student will exhibit behaviors and attitudes from his upbringing in a collectivist society which may reinforce his or her UK Academic Supervisor’s stereotype of the student. In a high power distance culture like Saudi Arabia, students will expect directions from their tutors  (Tamer, 2013) in contrast to a low power distance culture like the UK, where the students expect that the tutor will value and evaluate their own opinions and views  (Bakir, Blodgett, Vitell, Rose, & M., 2015). This could result in a misunderstanding of the Saudi Arabian student’s behavior by the UK Academic Supervisor unused to the Saudi student’s cultural context of rote learning (Siddiqui, 2012;  Mohammed, 2013) and collectivist upbringing (Ochsenwald, 2014) which also affects the student’s evaluation……………………………