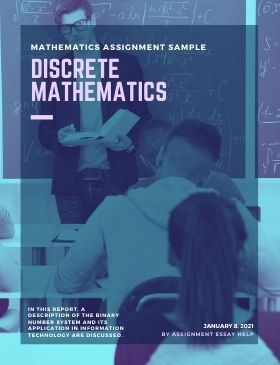 For further assistance in   Mathematics Assignment help, please check our offerings in Sociology assignment solutions. Our subject-matter-experts provide online assignment help to finance students from across the world and deliver plagiarism free solution with free Turnitin report with every solution.

Student will be exploring one Mathematical Topic and its uses in Information Technology. Students are to write a report on their findings.

Student can choose one from the following topics. However, after deciding on the topic to work on, student must meet his/her respective tutor to know which topic was chosen and to get some guidence.

The problems your group can choose from are:

A few centuries ago, humans developed the number system to meet the counting and calculation requirements. However, with the increased mechanisation, decimal numbers were unable to perform complex mathematical functions. This resulted in the development of the binary number system to cater to the Boolean logic which is present in the form of two states, i.e., True or False which is denoted using 1 and 0 (Foyd & Jain, 2008, pp. 16-20). With the evolution of computer devices, the binary system is widely used in the digital encoding. In this report, a description of the binary number system and its application in information technology are discussed.

According to Nechaev (2013), a number is considered as an object which is used for counting, labelling and measuring. The number system is the written representation of the number. Binary number system uses only two digits – 0 and 1. Due to the use of only two numbers, the base of the binary number system is considered as 2. It is one of the positional number systems, which uses 2 as a base (Shmerko, Yanushkevich, & Lyshevski, 2018).  Through the use of two symbols – 0 and 1, the numerical values are represented.  A positional notation with the radix as 2 is indicative of the base-2 system. It means that all the possible values in the binary number system use only two digits i.e., 0s and 1s. Wherein, 1 indicates a true state while 0 shows the false state. In comparison, the decimal number system, items are counted using ten different symbols which are represented as 0,1,2,3,4,5,6,7,8 and 9.

According to Lincoln (2014, p. 10), the binary number system is considered as one of the simplest positional number systems. This is the major reason for its application in digital computer systems. The two digits, 1 and 0 represent the two states (off/on) which are especially used to instruct computers and store data in it. Each of these digits represents one bit which is also called a binary digit.

A bit is the smallest and basic unit of computer memory. A binary digit ( 1 or 0) is called a bit. A group of bits results in a byte or a word, or code. For example, the 10 numerals (0, 1, 2, 3 …. 9) and the 26 letters of the English alphabet need 36 different combinations of 0 and 1. This means that for operating a computer, binary digits are required as it represents the alphanumeric characters. The concept of binary numbers holds a higher position in the modernised world, especially in computers and digitisation (Tocci, Widmer, & Moss, 2011).

In digital systems, microprocessor and communication systems, operations are performed using circuits such as the OR, AND, NOT, NOR, and FLIP which are used to implement Boolean algebra (Lincoln, 2014). In a digital circuit, a binary digit is used to denote a bit which is represented as 0 and 1. It is such a discrete system that makes up the fundamentals of the digital technology of today. There are two major reasons for using a binary number system for computers. Firstly it provides reliability, and secondly, it assists in reducing the circuitry required. This results in lowering the complexity, thereby increasing space availability and reduces energy consumption and overhead costs required.