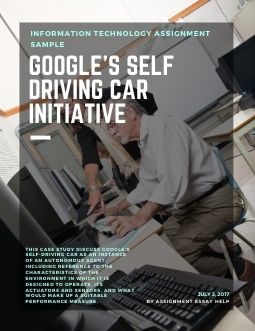 Discuss Google’s self-driving car as an instance of an autonomous agent, including reference to the characteristics of the environment in which it is designed to operate, its actuators and sensors, and what would make up a suitable performance measure. Some background reading is listed below, but you are encouraged to carry out your own independent reading. You should write no more than 1,000-1,200 words


To define a self-driving car in simple terms, it is a car which is capable of understanding the environment which it is to navigate and successfully do so without human interference. To complete this undertaking of reaching point B from point A successfully, every car is equipped with a navigation system a Global Positing System unit, and a complete plethora of sensors such as laser-LIDARs , radar systems, and cameras.  These cars use localization systems such as the GPS and navigation system to localize i.e. locate itself and use the real-time sensory data from its onboard sensors to refine and re-define its position constantly and builds for itself a three-dimensional layout of its surroundings, and then successfully navigates the given path.

How is it an instance of an autonomous agent?

The term autonomous agent generally refers to an entity that makes its own choices about how to act in its environment without any influence from a leader or global plan.

The primary objective of the google self-driving cars has been to develop a fully autonomous system which can eventually take decisions independently.

Three basic features of an autonomous system are: (Shiffman, 2012)

The eventual idea is to have a whole fleet of these self-driving cars, who can communicate with each other and learn the environments which each of the agents has learned in isolation with other vehicles so that the ability to perceive the environment keeps improving with time.

As Burkhard Bilger of the New Yorker puts it, the idea is that

So, the answer is Yes, It is intended for Google self-driving cars to be autonomous agents.

Characteristics of the environment in which it is designed to operate.

Presently the car cannot be driven in the majority of the places cause of the lack of detail map, network connectivity, and various other reasons. Again in every setting whether urban or country, there is a need for parking, which yet to be perfected. (Gomes, 2014) There are problems with the usage of the car in snow or heavy rain, and again there could various temporal changes on the roads such as a gaping pothole or sinkhole etc. The ideal environment for these cars is the one where everything is deterministic. Which as all of us have experienced road travel is anything but deterministic even on the best of days.

There are multiple sensors in the car.

Each sensor offers a different functional and operational utility for the car.

All these three sensor feeds their data into a computer which in the car and in that system these views are integrated and a combined and an integrated color-coded view of the world is generated.  It also has a high accuracy GPS system on board. The information collected in real time is then overlaid on the digital maps, i.e. Google maps and Street View image data which have been collected with the help of specialized cars all around the world by Google. The result is a very comprehensive unparalleled road atlas. (Bilger, 2013)