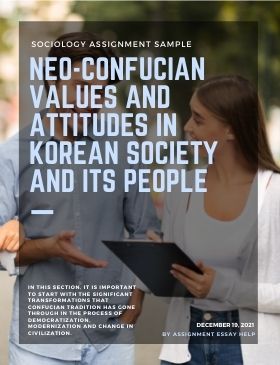 You can choose 1 topic from the below 2 options.

2. Describe the ‘Neo-Confucian’ values and attitudes prevalent in Korean society and people.

In this section, it is important to start with the significant transformations that Confucian tradition has gone through in the process of democratization, modernization and change in civilization. The difference that is observed between Confucianism and Neo-Confucianism is stronger and arguable than the difference between ‘Catholicism and Protestantism’ (Weiming, ‘Rise of Confucian East Asia’, 195-196). As a result of the influence of Western thoughts and philosophy, the angles and ways Neo-Confucianism is argued against are more radical than any other modern philosophy. The long two thousand years old Confucian history is roughly divided into three streams: Classical Confucianism, Neo-Confucianism and New Confucianism of the twentieth century. Confucius, who is the father and founder of Confucianism, marked the beginning of Classical Confucianism from 551 to 472 BC. He defined himself as a person who would transmit the scholarly tradition which is ancient. It is not so easy to trace its origin as it can likely be several centuries before. However, it came to end within the 3rd century when Han empire was disintegrated from its root. Its ending gave birth to its next transformation which is considered neo-Confucianism. Neo-Confucianism was started in the Song dynasty by the Confucian Revival from 960 to 1279. This dynasty started spreading its ideas and practices to Korea, Japan, and Vietnam ((Weiming, ‘Rise of Confucian East Asia’).

Neo-Confucianism shaped the social, cultural and political ethics and rules in China, Korea, Vietnam, and Japan. In the Confucian tradition, the whole East Asia got so much seasoned and experienced. The political, social and cultural decisions were Confucian in both words and works. It molded the people of East Asia culturally, socially and politically until Western influence and its power was seen during the mid-nineteenth century.  During that period of neo-Confucianism, its teaching was known to very flexible and adaptable. That is why, it could adjust to different styles of leadership and organization, from family to society and politics. It started having and maintaining a coherent view of the world even in divergent situations. Confucianism is an integral and crucial part of East Asia. It is considered a salient feature of the world which is very different than other religions like Christianity, Buddhism, Hinduism, and Islam. Confucianism is taken as regional phenomenon as it does not tend to project itself like a world religion (Weiming, Rise of Confucian East Asia, 196). However, its rapid spread among the East Asian countries has been seriously recognized (Reischauer, The Sinic World).

Confucianism emerged in Korea in the form of Chinese influence. The introduction and development of Confucianism are considered as the most substantial influence of China in the intellectual history of Korea. It gradually became a fundamental part of Korea which shaped the moral, cultural, social, legal and political system. Confucianism has become a Korean legacy in modern times. It has given a way of life to Korean people by maintaining a social relation into their lives; it instilled the relations between young and old in the Korean people and maintained a high culture between them. In Korea, it is seen as a rational way to hold the nation together without any internal conflict and tension among its people. Confucianism was the root of all learning till the time of King Sejong who ruled till 1450. The branches of learning were so much motivated by the thoughts of Confucianism that in the root of all studies and learning lied Confucian thoughts. The period saw the establishment of Korean Confucian schools. They mostly had teachers and scholars who were foreign-educated. The libraries were rich and almost fifteen important Confucian works were included in the curriculum. Korea was still tolerant when it came to Buddhism, but only outside the cities where politics was not that much in discussion and order. Korea adopted neo-Confucianism as the state ideology during 1368 when Ming China came to power (Tucker, ‘Relevance of Chinese Neo-Confucianism’). Neo-Confucianism became the primary belief for educators, researchers, and administrators. Korea got the appearance of two influential scholars named, Yi Hwang and Yi I during the second half of the 16th century. This happened because of the efforts of Jo Gwang Jo who worked a lot to spread neo-Confucianism in the Korean public.