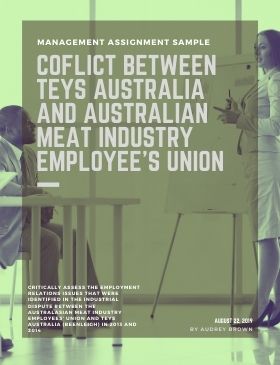 An overview of the meat processing sector in Queensland

The meat processing companies in general and the beef industry, in particular, has shown a significant growth over the last pertaining to the status of Australia as a disease-free beef market.  The beef Industry is the second largest industry in Queensland accounting for 60% of the Australia's beef exports. The focus is on exports and majority of the product is exported to South-East Asian countries. (Rolfe, 1999).  Meat processing plants have been one of the main sources of employment in Queensland creating 1,48,000 jobs in the Australian Economy. (Anon., 2010). But the highly significant meat industry has been threatened by exports of live cattle and this demand for the premium live cattle has been due to the increased living standards in the developing countries. Most of these exports of live cattle has risen in Queensland from around 50,000 to over 1,75,000 heads annually. (Rolfe, 1999)

The second important factor posing a threat is the inadequacy of cattle supply. There are certain natural factors responsible for this which might include drought and cyclical turndowns.

Research has indicated that this industry is a labor-intensive industry, but the skill shortage may not be an issue because jobs are not skill based jobs but the labor shortage may be considered as a concern and this shortage may prevail because of low wages and removal of the award protected conditions. (M., 2000)

There has been a predominance of poor industrial relations in the meat processing industry in Queensland. Kenneth Walker (1970), has stated that 'The heavy incidence of conflict and stoppages in this industry may be explained first by its technical conditions of production, particularly those that make it seasonal and account for rapid fluctuations in the demand for labor.' (Walker, 1970)

This industry is quite volatile and uncertain and there are many competitive forces prevailing in the industry, particularly live cattle trade, cyclic downturns, enterprise bargaining agreements, etc.

It can be said that there is an interplay of demand and the supply in the meat processing industry in Australia in general and Queensland in particular. Over the past fifteen years, some 15 plants have been closed in Queensland because of the declining trend of profitability. (Sangster, 1998)

Since there has been a strong conflict of interest among the parties due to economic volatility and uncertainty so there has always been a provision of tension between the trade union and employees.

In this scenario, there has been always an attempt by the parties involved to serve their interests. The producers have been involved in the export of live cattle in order to sustain during the downturn in the industry. As has been already stated that there is an overcapacity of plants in this particular industry, therefore the importance of the maximization of the production and minimization of the costs can be realized.

Even the employees want to safeguard their interests as the industry is a seasonal industry. They ask for the better remuneration and extra bonus as working conditions are neither pleasant nor safe.

Because of these circumstances, the workforce tends to be unsettled and associated with militant and rebellious work habits (Cutler, 1973). In addition to this, the process of production is such that there is a proper flow of work through various stages from killing to slicing. There is a specialized group of workers for each activity and these groups of workers can pose a threat to employers as employees are in control of processes. The employers in response can threaten the employees by pay cuts, layoffs, closing the plants in order to take control of the process of production. Indeed phrases like 'irritation tactics' show the spirit and atmosphere of workplace relations in the meat processing industry.

Both employers and employees are an advantage during the different stages of the production process with employers exercising control at the commencement of each season dictating the terms and conditions to the employees whereas employees enjoy the power at the peak of the season when they are at the helm of affiars to meet the deadlines and schedules. These circumstances have not been conducive to harmonious industrial relations. (Cutler, 1973).

Another aspect which had a huge impact on the employment relationships in the meat processing industry is neo-liberalization. As has been known as a well-known concept- it is associated with making the private industries free from the impositions of the government which has led to the wage reduction by the de-unionization of workers and eliminating workers' rights.

Few researchers suggest that the neo-liberalization is important has played a crucial part because the meat industry is characterized by unionism and irrational behavior. (O' Leary and Sheldon,2012).

Neo-liberalization has been discussed as a concept by many researchers in the past. (Kochan, 1986), tried to find the relationship between the structure of employment relations and the external environment. There has been an opinion also that neoliberalism gave industrialists a huge choice of taking control of the decision making in terms of industrial relations.

In purely industrial or employment relation terms a neoliberal environment could be thought of as, those ideologies which deny the role of the unions in the economy of the nation or governance of the workplace. (Boxall, 1997)